The Pilgrim archetype is the wanderer, the traveler, the outward movement of running as an inner journey. It is the Pilgrim that wants to find meaning through running. This may take them to all corners of the world, doing 7 marathons on 7 continents in 7 days, or it could be finding a new path out your back door. The Pilgrim is always moving, wandering, exploring. It relies on a sense of adventure. It’s the Pilgrim in me pursuing my 50 marathons in 50 states challenge. It’s also when I’m excited to find a new patch of woods less than a mile from my house that I never knew existed. I don’t have to travel to far off lands, although I’m a traveler by nature. I follow my heart towards what it loves. It’s the deep longing to answer the call, to step out the door. You never know where your feet will lead you! The shadow side of the Pilgrim is not giving yourself permission to roam. We can get too hung up on endless responsibilities, social conventions and logistics to give oneself permission to step into a new way of moving and being in the world. The Pilgrim is brave, not afraid to follow the breadcrumbs into this big wide world. Your adventure awaits! Take on the mindset of an explorer next time you run. 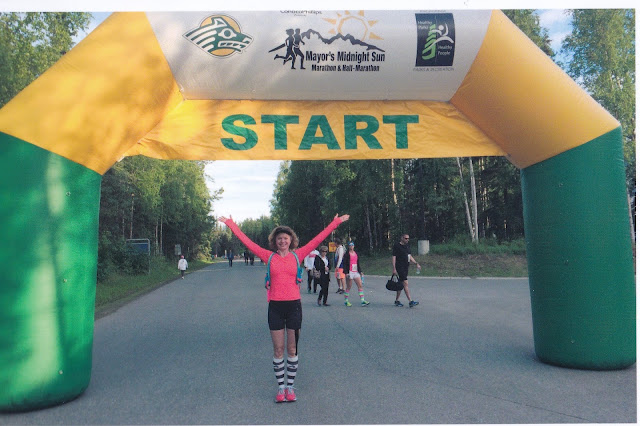 In the summer of 2017, we spent a week in Alaska living in an RV, my family of four. We went hiking and rumbled across the gravel road of the Denali Highway traversing around the stunning beauty that seems to go on forever in the beautiful state of Alaska. I had originally planned to do the famous Grandma’s Marathon in Minnesota in June since if you’re a marathoner from Minnesota, it’s the race to do. However, when we planned a family trip to Alaska, I was fast to look up to see if there happened to be a race that same weekend and lo and behold, there was! It was to fall on our last day of our family vacation. It seemed feasible to get back into town after a week of RVing, hit the expo packet pick up, then get a hotel the last night so that I could leave my sleeping family at daybreak all by myself and catch a bus to take me to who-knows-where Alaska, get dropped off, run 26.2 miles of absolutely unknown territory, then meet my family back downtown Anchorage at the finish line 5 hours later. Seemed totally doable! It was my Pilgrim archetype talking. I’m glad I had learned the ropes for travelling to a race before this, since this was a whole different kind of adventure. 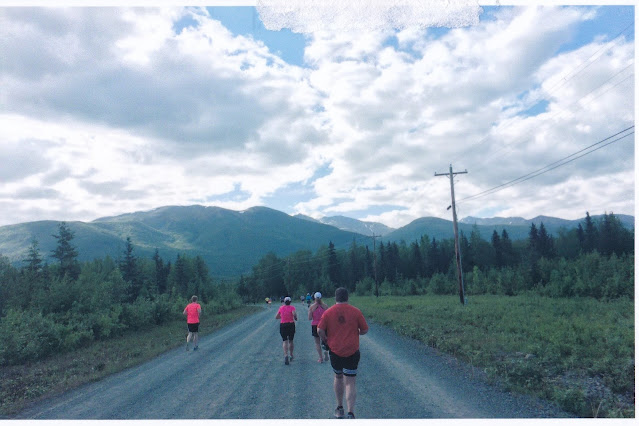 I left the hotel room in the early morning, my sleeping family in their beds and immediately was barraged by a black-billed magpie as I left the hotel parking lot by foot. I questioned for a moment what in the world I was doing. I was getting a bus in a city that I didn’t know a sole person, leaving my family and travelling by foot for 26.2 miles where I could run into any sort of animal. I had already seen moose roaming the streets like we see squirrels at home. This was all to get another marathon notch on my belt. It was beginning to feel a little bit crazier but appealing all at the same time. A marathon in Alaska has its own unique risks. I had read about the real possibility of seeing a bear and how one should really run with a group, since then the bear is less likely to be spooked and therefore less likely to attack. Should I wear a bear bell, I wondered. The mere fact that we would be running didn’t bode well, since that’s the last thing you are supposed to do when you see a bear is run. It could trigger a primal chase response. I typically don’t run with people, I’m a solo runner even during races, so I knew that would be different. 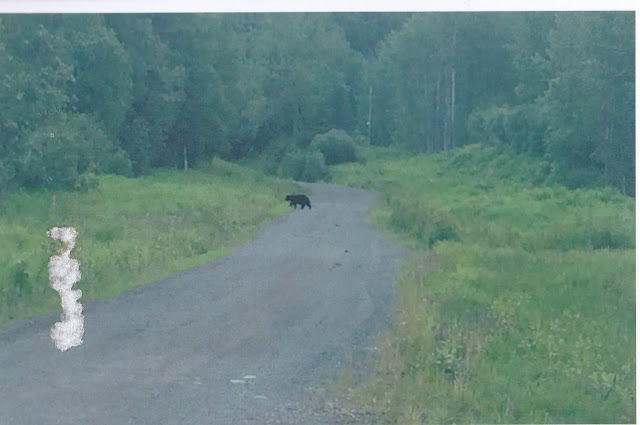 I got on the bus full of strangers and we were dropped off at a school outside the city limits. I absolutely adore Alaska. We mulled around the starting area; my main goal of the day was to just keep reminding myself to take in the fact that I was running a marathon…in Alaska! This may never happen again, I thought. The Pilgrim in me knowing every step was something new entranced me. This is what I was born to do. The race started along a highway that leads out of Anchorage, but after a few miles we were already on a dirt road. It wasn’t too long after that people were pointing at something off in the distance. I looked down the path and there was a bear! It was quite a way off. It didn’t seem to notice us or at least didn’t seem to mind. However, it was a reminder that we weren’t running in the suburbs anymore, we are in Alaska! We then hit a long stretch of gravel road that made its way through a woody area. We saw lots of fresh bear scat on the path, so we knew there were likely more not far away. I broke my habit of running alone and ran with a group of women that had all come as a group for the run all the way from Florida. I knew that I was among other Pilgrim archetype minded people when a “girls weekend” is flying from Florida to Alaska to run a marathon. They told me about the Marathon Maniacs group that they belonged to. It has requirements to run full marathons close together. The first level is 3 marathons in 60 days and then gets more and more “crazy” from there. This planted the seed in my head that after I did Med City and now Anchorage close together and if I went home and added a third race, I might be able to join the club. I enjoyed talking with them and kept a quicker pace than I normally would since I wanted to stay with a group, and they were very friendly and interesting.

I separated from the group after a quick biffy stop and then the race became more a trail run on a single-track trail through the woods. Not surprising that a marathon in Alaska would be a bit wilder and more adventurous. I didn’t realize how much we had climbed until we got to the downhill portion that lead for miles and miles back down into Anchorage. I tried to take in everything and let me Pilgrim archetype lead the way internalizing that I was in the middle of Alaska running 26.2 miles down the side of a mountain. What an opportunity! I always try to have mindfulness during a marathon of what it is I am doing and am capable of. Running 26.2 miles through incredible places is such a gift. The lifestyle I have chosen and now fully embraced is incredibly rewarding internally.  Would I run even if I didn’t have races to go to? Likely, however the opportunity to have these incredible experiences, stumbling into this way of life, embracing it and fueling that inner flame has been a real-life changer for me. 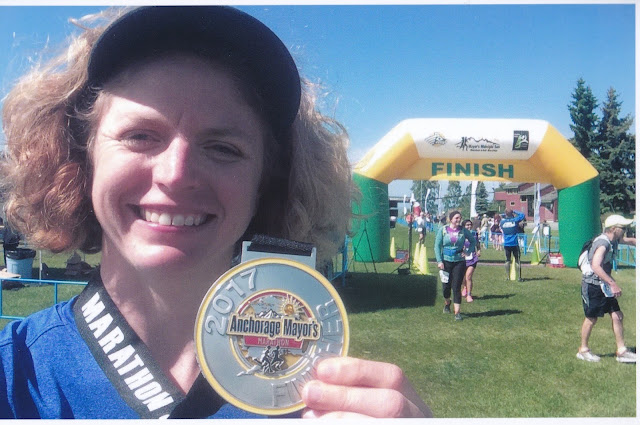 I found myself getting closer into the city of Anchorage and the wilderness trails became more “urban” nature trails and we made our way towards the finish. I was tired and hurting, yet I wasn’t in a hurry for the race to end. I knew my family was going to make their way from our hotel to the “central park” of Anchorage where we had visited the night before was hosting the finish line activities. I saw water, which meant I was close, then my husband and kids at the bottom of a hill that at that point of the race, with .2 left looked like it went straight up. The kids ran with me up the hill and into the finishing chute. What a race it had been! We took the redeye home overnight and I was back to work. I had a real sense of accomplishment but wanted more and the Marathon Maniacs criteria had me curious. I needed to do one more in the next month to join the club.