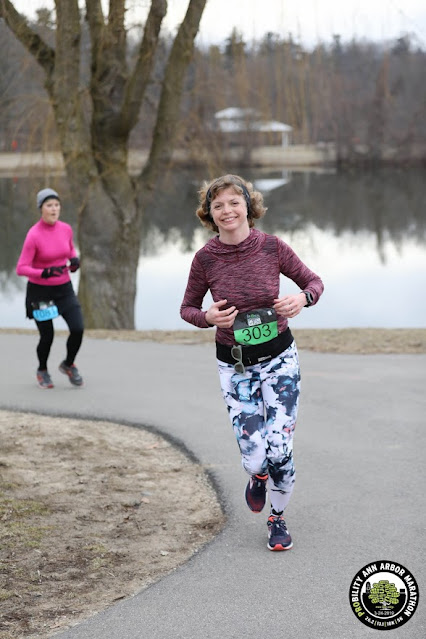 The One archetype is the boost of energy just before the finish line. It could be during a race, or out on a run from home. It is more than adrenaline, it is the moment that we feel the union, having touched the unknown. That last .2 at the end of the marathon, the last bit of longest run we have ever done, completing a short run after time away due to injury or illness. It is the full realization that this life, this run, is a gift. Mackenzie talked about this in her book The Perfect Run. It is about bypassing the conscious mind. This is can get esoteric. Elite runner, Shalane Flannigan talks about the “church of the Sunday morning long run.” that she grew up with. Some will never elevate running to that level, but for others this can be experienced but can never be explained. You are the giver and receiver of life, through the run. When the One is in shadow, we over-intellectualize. We talk the talk, but don’t walk the walk. The running is the beginning and the end of the circle. It’s when we run not just for ourselves, but for the greater good. One can go down a rabbit hole of thought about how mysterious running can be, yet so simple. Just put one foot in front of the other.

Adventure has been my intention all along. Following the threads of the journey. Embracing constant change. Accepting the questioning without the need for tidy answers. Not knowing the outcome. Life will always be an adventure. Peace lives in the intent to be curious and exploring. It loosens expectations and leaves possibilities wide open. It feels healthy, alive, vital. The perfect antidote to staleness, depression and anxiety. This has been my approach. On a cold December day, when I’m the only one out running, I have the resolve, the focus and intent that’s not about mileage or pace, but feels raw and primal. Winter running is for the pure joy of it. Over the winter I had several deep reflections on being “enough” and burn out at work. “What do you do to make sure you can shine without burning out?” Danielle LaPorte asked. That was my mission. To navigate that terrain. My running lessons become my life lessons. It’s about awareness. Being present in each situation, in body and mind. Let go of tension and difficult decision making and go with what feels right. This is what I play with when I run and then aim to use in my daily life. 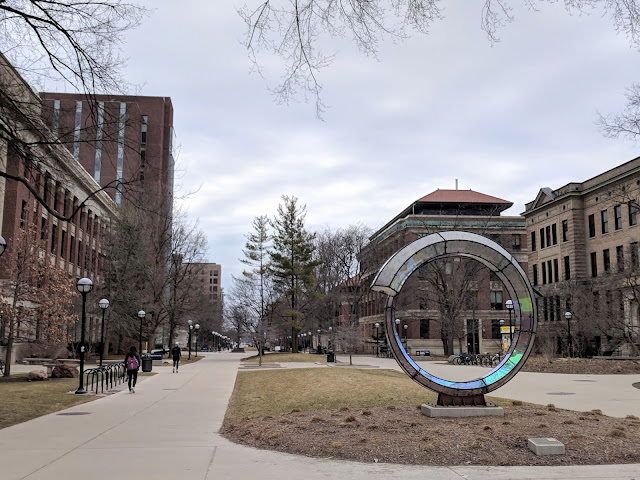 Winter running is one of solitude. All of those hours out in the cold, barren land. Finding beauty in snow drifts, footprints of animals scurrying about. I enter into the natural world. The dance of the training alone and then coming together as a community of runners doing a race together. I find the greatest joy in the weaving of the two together. I cherish it for what it is, a marvel and a surprise. I never could have predicted this. Change is inevitable and that is the seed of optimism and hope. It’s our connection with the One archetype, having touched the unknown. To be utterly fascinated with life is the task. How can my body and my mind do this? 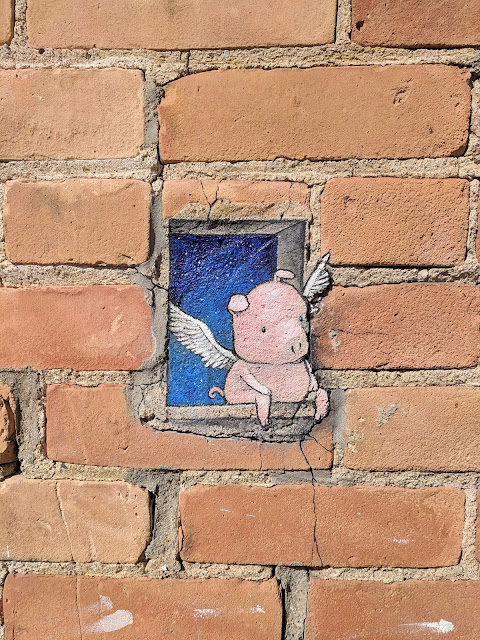 I decided that my celebration for my winter miles was going to be flying to Detroit to do a marathon in Ann Arbor, Michigan during my spring break. I had put in the miles, over snow and ice for hundreds of miles and countless hours. It was my earliest marathon ever, in March. Winter is a difficult time to have a marathon build up. I enter spring in celebration of what I’ve become and what lies ahead. This was the first time I had flown to a marathon. I knew that if I got serious about my 50 marathons in 50 states goal I would need to start flying, so I was curious to see how it would work out, doing it all alone. I had been traveling to races alone, but flying there, renting a car, getting to the expo, the hotel and the race was a whole other story. It felt invigorating to get out of town after a very stressful winter. The weather in Michigan in March isn’t much warmer than in Minnesota, but the atmosphere was totally different. Ann Arbor was definitely a college town and it won me over pretty quickly. 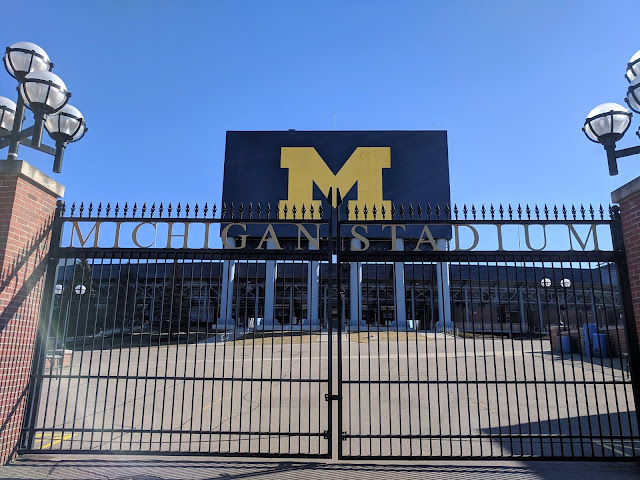 After going to the expo to pick up my bib number and shirt, I made my way into Ann Arbor after landing and renting my car. I had done a little research before the trip and wanted to find the David Zinn chalk art that is hidden in plain sight around town on walls, hydrants and asphalt. I came across some of his whimsical art right away and it became a scavenger hunt to find more. I then went to a pub to grab a bite to eat, stopped in at an independent book store to get a t-shirt and take pictures down the incredibly photogenic graffiti alley. The town was definitely into its college and the “big house” was the ginormous football stadium that I later learned has drawn a crowd of 100,000 people every home game since 1975! I got into the Ann Arbor vibe pretty quickly. I had a ginger tea at Sweetwater Tea, bought wonderful artisan bread at The Argus Farm Shop and went to the Den with all things U of Michigan. I passed the incredibly large M sign at the stadium and headed towards my hotel by dinner. I settled in and went to bed early ready for a big day the next morning. 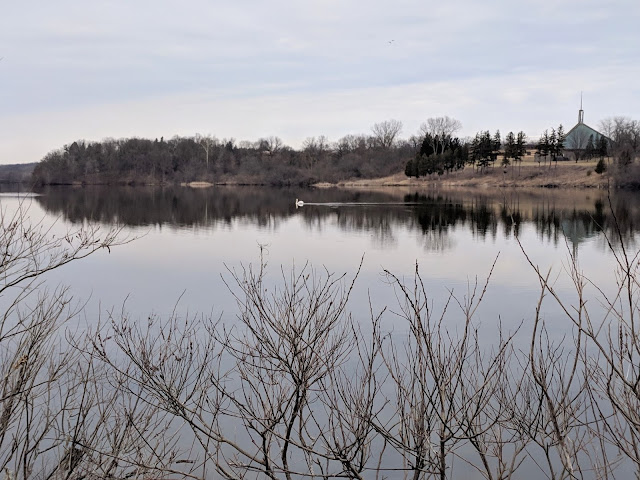 On a cold, dark Michigan winter morning, it was 7 am and the race announcements began, just as I was starting to shiver it was time to go. The sun had just started to rise and we ran straight towards the stadium with the huge M for U of Michigan lit up. Before long we were on campus, literally running through the pedestrian walkways through the main corridors. Since it was Sunday morning there were very few people. I tried to take in all the scenery enjoying the old buildings and scholarly feel. There was no snow and ice as we still had some at home. The Huron River was completely clear of ice and was still and smooth as glass. There were swans resting on the surface and geese honking overhead. I wondered what migratory birds they get passing through.  I settled into the run knowing it would be awhile and there was so much to take in in this new city.

It was the end of March and we were far enough north that nothing was showing any bits of green yet, all was still brown. However, it did have a bit more of a springy feel than at home. It felt like we were right on that cusp. Just how I felt personally as well. Ready to burst, but not quite there yet. We made our way to a gravel road and up the infamous “arb hill” into the arboretum area. We ran by the medical center and back towards campus. We wound this way and that as I followed the bobbing head of a runner in front me. Now with a few more students on campus it was a bit tricky to keep track of where the course was exactly. The half marathoners split off and we wound around some more. Some of the full marathoners ahead of me were headed back out to do the whole loop over again and I was pleased to see that they weren’t terribly far in front of me. They looked strong so I figured I must as well. We made our way back out of campus again. 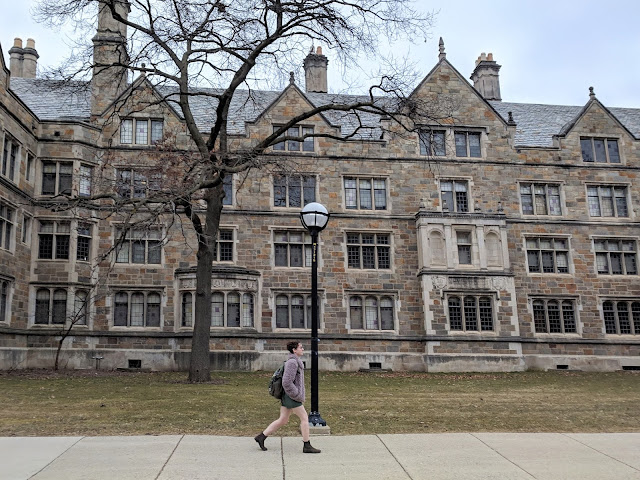 Even after having seen everything already on the first loop I was still excited to pass by once again. My body stayed relaxed and I just ran, keeping my mind clear was not hard. The landmarks came back around again on the second loop. It was brightening up, more people were out and it was warming up a bit. Other runners were out for their Sunday morning jog, soccer fields had kids playing and it felt like a regular Sunday morning in Ann Arbor. I had been transported to another time and place. It felt like the “perfect run” if that ever could exist. I felt the One archetype close at hand. During the last 6 miles, the training of the mind is as important as the training of the body to get through. Back up the arb hill which was now a little sloppy since the sun had warmed the earth enough that it wasn’t frozen anymore. Under 2 miles to go we were back on campus and I was taking it all in one last time. In the last mile I expressed my gratitude for being able to do this and for the wonderful city that I had just run through. I may have even said “thank you, Ann Arbor” out loud. I picked up my pace and caught up to a girl that I had been running in the wake of for a while. The crowd on the sidelines cheered as I entered the finishing chute and I choaked up with gratitude for this gift. I was overcome with emotions and I did my finish line fist pump into he air and I was done. Just like that. I felt good. I had showed up to all my runs all winter long, in running cleats for 4 months, through rain, snow, ice and sleet and I had finished strong. Each race I go down the rabbit hole and come up again a different person. 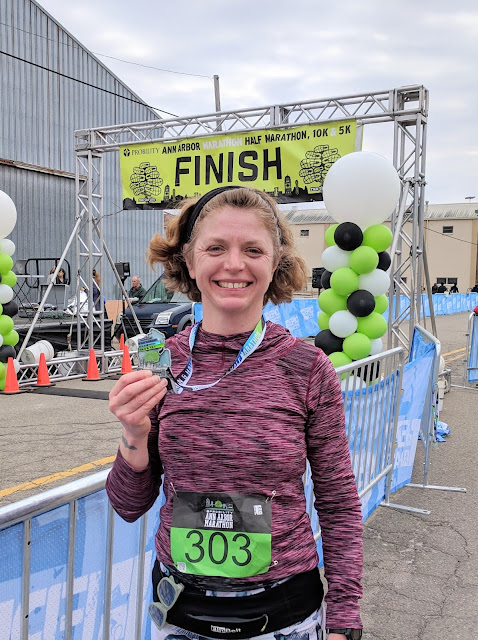