The Unseen archetype is our intuition. Being the introspective person that I am, one would think I would have a direct link with my intuition. This has not been the case. I have listened to the ego for far too long and the Unseen has been in shadow. There have been glimmers of listening to intuition on a run when I would spontaneously make decisions based on feel. I also try to listen to my inner voice in my writing. I have kept a journal all my life. I usually write down stream of conscious ramblings first thing in the morning, writing faster than the “monkey mind” of my inner critic can keep up, similar to “morning pages” in Julia Cameron’s The Artist’s Way. Lately this concept of intuition has played a bigger role in my life. How does this apply to running? I am trying to “trust my gut” more. To feel the energy of the Unseen archetype in all the ways it has tried to get my attention. I try to do what I feel compelled to do regarding where, when and how long I run and which races to do. I try to go with the flow, be more open to what I sense and intuit and even take the risk of acting on it and see what happens. I try to slow my mind and feel what is trying to come through and trust this guidance. Trusting more in myself. The shadow Unseen creeps in all the time. Constantly seeking answers outside myself. The inability to make decisions. Trying to think my way through rather than hearing my inner wisdom. I try to practice letting go and trusting. 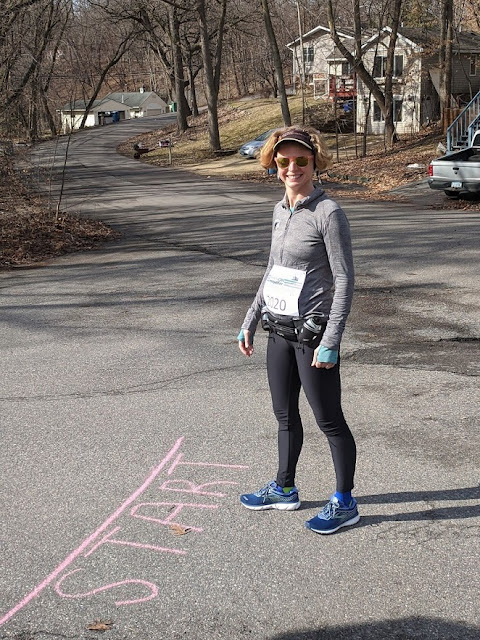 #23. Montpellier Marathon- from home during COVID 2020

When I went to Atlanta in February, the caronavirus had just started getting more attention in the US. The first cases were in China early in 2020 and by the time I went to Atlanta the US had just a few cases. It had been hitting Europe pretty hard and Italy was the new “hot spot. Spain looked like it could be next and that was putting our spring break trip here in jeopardy and my marathon in Montpellier, France as well. Day by day the number rose around the world and sporting events, races, concerts and gatherings of all types were beginning to be postponed or cancelled. Within a week of coming home from Atlanta I received an email that the Montpellier marathon I was to run had been cancelled. I was pretty bummed about it. I was also worried about our trip. Then on Friday, March 13th, 2020 the full weight of the virus and how it was going to impact our day to day life was beginning to unfold. The president declared a national emergency and stopped all air travel from Europe. Gyms closed, libraries, restaurants in door dining closed and a few days later we found out the kids wouldn’t be going back to school after spring break and would be doing e-learning from home for at least the month of April. Our trip was off, life as we knew it was drastically altered for the foreseeable future.

However, running was something that was not taken away. Even with “social distancing” now in our vocabulary and everyday life, one could still go outside and exercise, as long as we stayed 6 feet away from one another. That was not a problem for me, since I typically train solo. Running became more important than ever during this time of uncertainty, stress and downright dread. I did my daily run and decided that the week that I would be running my marathon in France, I would do the marathon from home, on my usual route. I would do three laps around the lake to get to 26.2 miles. On a cool, sunny spring morning my daughter drew a start line with sidewalk chalk at the end of the driveway. I printed out a handmade bib that said Montpellier Marathon on it and #2020 for the year and the flags of Spain and France as a nod to the countries we wee going to visit. I and set out to accomplish something that I had worked hard to get to. This was certainly an unseen global pandemic coming our way. Nobody could have predicted it. I also was embodying the archetype of the Unseen by trusting myself to still carry on the story I wanted, even if it was turning out differently than I expected. Even if I couldn’t have the incredibly beautiful scenery I’m sure I would have experienced in France, I trusted my intuition that I could make do with what I had here. 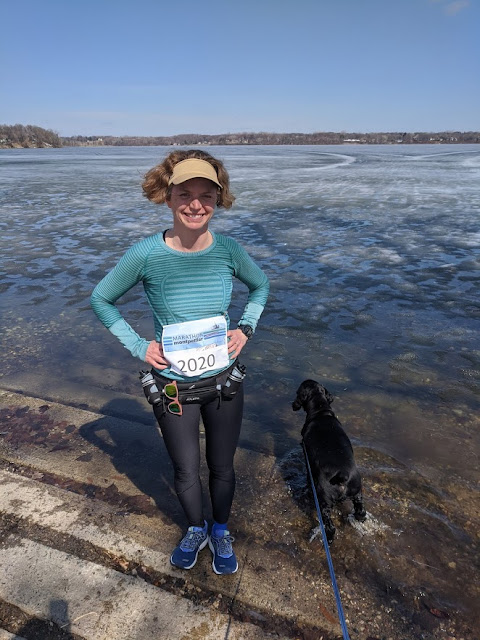 With a “go mom!”  cheer, I was off. I felt like I was on my daily run, as I had done hundreds of times in the past, yet this time was also very different. I was mourning the loss of the marathon that would have been my first international race. It was a trip that would have been the kids first trip overseas and a chance to use their new passports. Also the uncertainty of what the future will be was on my mind. The future was certainly unseen. If I couldn’t do the trip, then I would just do it here. Running was the little bit of control that I still had. I had felt pretty entitled to the trip and the race. I was using it to soothe the deep depression I had been in floundering around with the story I was living in. I wanted this new story that I was creating to be linear. I had worked so hard, I thought. I deserved this. When the races fell away, I felt like my grasp of the ledge I was hanging on to was falling off as well. I wrote, I ran, I documented and reflected. That was what was calling to me. I was hoping that I could write and run out all my inner angst. I found my way in towards my center, my source. When I set out to run my Montpellier Marathon with none of the usual stimulation of a new place, crowds, cheering, excitement or a big finish line, I had no idea if I would have the motivation. 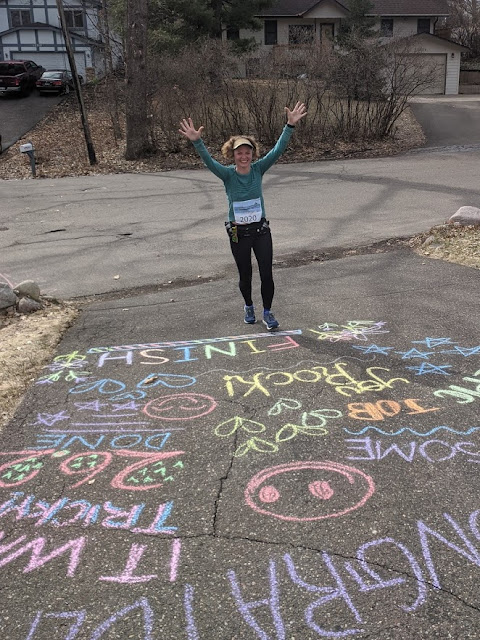 I set out as me, myself and I, the Unseen and several hours of running. The landscape was not new. The sky was blue, the paths were pretty quiet and I had no music on. I never run with music. I passed all the same things I always pass when I run around the lake. I had a glimmer of peace that it was all ok. I found some acceptance in the presence of “what is” rather than the suffering of what “could have been.” When I run for training, I feel like it’s a mediation, it’s the only place I need to be and the only thing I need to be doing. The regular race stimulation was not there, but I realized that I didn’t need that. I run because I love it. I run because I love who I am when I am running. In these crazy times that feels like enough. The first 8.5 mile loop went pretty fast. I stopped at home briefly after for water and a quick snack. That way I did’nt need to carry all of that along with me. The building at the park across the lake was closed due to the pandemic, so I had nowhere else to stop for a bathroom break. I did a second loop, my mind was clear and taking in the surroundings. “Just be” I told myself. The ice was starting to recede from the edges of the lake. Just as it was starting to feel long at mile 15, 16 and onward I saw our dog playing in the frigid water at the edge of the lake. We went back to our house together and I got ready for my third loop. With “only” 8.5 miles to go I stayed pretty motivated for the finish. 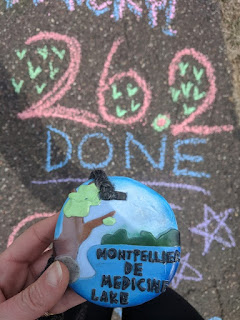 I was almost there, I made it up the hill and flew down into the “finishing chute” that was our driveway. Both kids were there, the driveway was covered in sidewalk chalk with accolades such as “Congraulations- you’re awesome-you rock-26.2 done!" All above a huge FINISH line. I was presented with a handmade clay medal that says Montpellier de Medicine Lake with a lake scene that my daughter had handcrafted herself. My son set up a little food stand similar to the post race snacks and refreshments. What a finish! I was deeply touched. I felt incredibly supported and grateful that in the midst of a pandemic, I had my health, our home and each other. Marathon #23 was in the books. Even if it didn't "count" officially and wasn't a new country, it was one that I will always cherish. 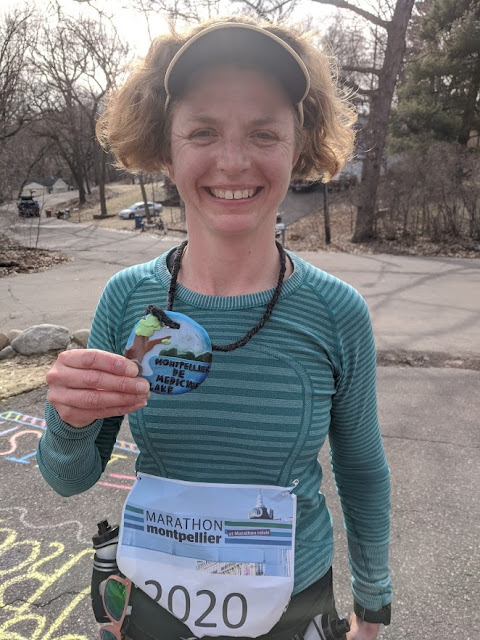