The runner’s journey is the voice finding expression in the run. The act of movement is our art. There was a time that I would go out on a run and let my mind soften and be open to a 3-5-3 haiku verse to come forth during the run. It would bounce along in my head, the pattern meeting the cadence of my feet. I would play with it as a I ran and quickly jot it down when I returned home. It was a simple expression in words of the experience of a run. The run itself is a poem. The repetition of each foot hitting the ground. We are an artist in our moving body and mind. The shadow side of the Poet is the inability to see the creativity of the run. To be hung up on time or distance or be distracted by daily stressors. Feeling like the run has to “count” for something. Our hard work must be validated. When we realize the run is an ephemeral expression, we become a poet of movement. That is the magic of the Poet. Trust that you don’t have to produce anything, your shoes will carry your truth. 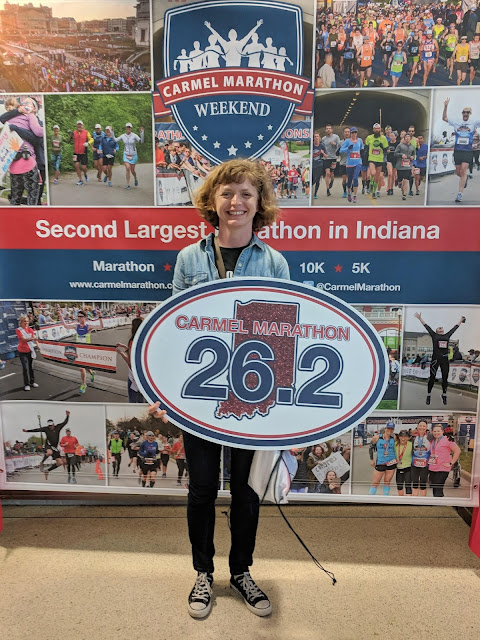 Just a few days after my marathon in Ann Arbor I was set to fly into Indianapolis to run my second marathon in a week, in Carmel, Indiana. I did all the recovery I knew how and was ready to head out to Indiana, just 5 days after returning from Michigan. The forecast for the race was rain and dropping temps. I knew that if I was going to start doing marathons year round, all around the country, the weather certainly was not always going to be “perfect” running weather. I train year round in every type of weather so that whatever race day throws at me, I am ready!

I was excited for yet another adventure. I began my journey with eyes wide open and a beginner’s mind. Life is a grand adventure and my goal is to seize it and explore by foot in 26. 2 mile increments. I land in Indianapolis and get my rental car. I stop at Pots and Pans Pie Co. for a delicious beef and mushroom pot pie lunch with sugar creme brulle pie and grabbed a sweet apple pastry for the next morning. Their wonderful pies really hit the spot. They have a thick hand made crust that was both fluffy and substantial at the same time. I then went to a arts district to find Indy Reads bookstore and a small boutique down the street called "Homespun". The area they were in is called the Bottleworks District after the amazing art deco old Coca Cola Bottling building that opened in 1931 and was the most “lavish” bottling plant in the 1940’s and then sold to the owner of the Indianapolis Speedway to house his old cars, then in 1968 it was the central kitchen for Indianapolis Public Schools. Now it is under re-development again. I needed to get to Carmel for the packet pick up so onward down the interstate I went. The expo was at the high school. I got my race supplies and a bit of merch to remember the trip by. Everyone seemed to be buying their $40 rain jackets and I was glad I had brought my own. I got to my hotel and was ready to pack it in for the night, it had been a long day.

I woke up before 5 am of race day and it looked like the rain system was getting pretty close. It was definitely going to be a wet marathon. I was not thrilled about that, but I had come a long way and I certainly didn’t have much choice. I grabbed what I thought I would want to wear and some extra clothes to be prepared for running in four and a half hours of rain. I had read that shorts are better than pants because bare skin dries faster than wet, cold fabric. So on went my short and a couple layers of shirts and a rain jacket. I put an outfit of dry clothes in the car for afterwards. Raining and 60 degrees and still dark. I got into the parking garage and looked at the radar and saw that there was some  heavy rain yet to pass through before the start of the race. This was definitely going to be a different race, I could see that. I got out and headed towards the starting area. The rain was coming down hard and it was windy. It was pitch black and the rain was coming down in sheets. What in the world was I doing!? Runners were huddled under tents and I was soaked, hair and all by the time I got through the porta potty line before the race even began. I was still pretty calm. With 15 marathons behind me, I was confident that I could do it. I was going to do what I came to do. My main goal was to not get chilled. I knew the temperature was going to be dropping throughout the day. Being wet already, I knew things could get dangerous quickly if I got cold to the bone. 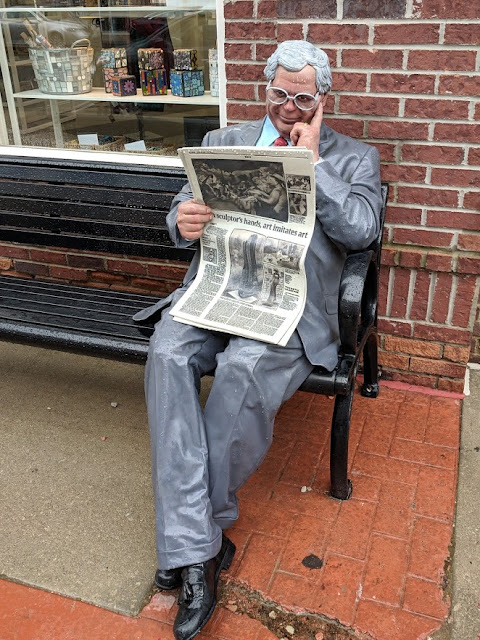 It was time to move to the start area. They did an abbreviated version of the starting ceremony and we were off and running. Lots of people wore giant ponchos that flapped in the breeze. There wasn’t much other noise, other than the sound of rain, feet running and fabric moving. We all started to get after it and tackle one mile at a time. Every once-in-a-while I would step in a puddle and get my shoes even more wet than they already were. It didn’t seem to phase me since I was already soaking. I didn’t see mile markers and I just kept my eyes on where I was going one step at a time. I tried to take it all in and look around. The rain would let up and then it would start again. My routine was taking my jacket off when it wasn’t raining to try to dry off a bit and not overheat. Even when conditions are petty cool, you have to mind your body temperature. Then when it started to rain again and I knew the next round would bring cooler temperatures, I put my jacket back on. All my focus was on my body regulation. I didn’t care about pace or time. With each passing wave and my wet hair, I could feel the day was getting pretty chilly. My bare legs with shorts on were numb. I really felt for the volunteers that were working at the air stations that would be out there all day. Runners made sure to say thank you to them as we passed. 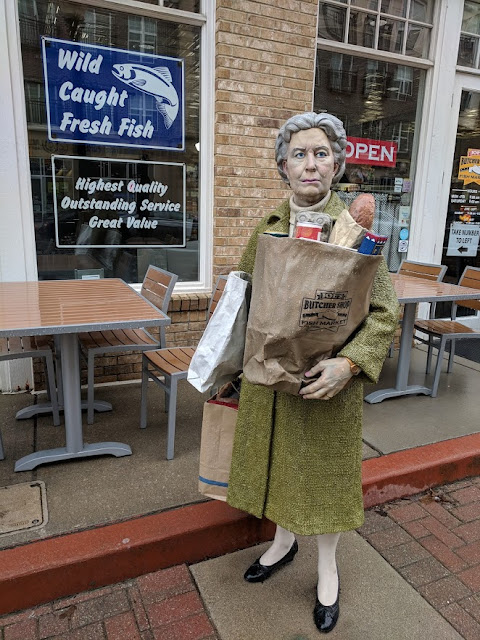 Half way through we went through the entire finishing chute with the half marathoners before the full marathoners cut off. I had done this in other races and it takes a bit to mentally prepare yourself for another two and a half hours of running before you’d be back to that finishing chute again after 26.2 miles. There as a long, straight paved path that we headed out on called the Monon trail. Another hard part was seeing the faster runners at mile 25 passing us going towards the finish while we were at mile 14. It was a blatant reminder of how much more we had to go. Run the mile you’re in, I told myself. You have to really be present and running your own race. I was pretty confident and relaxed, moving forward step by step. The repetition of each foot hitting the ground was like a poem. I as finding my expression on the run. Nowhere else I needed to be, nothing else I needed to be doing. I was the Poet archetype embodied. Patience is a virtue with a marathon. You can’t be in a hurry, you just have to be present. The sky would get dark and then lighten up again. Everything was in ebb and flow. All the ups and downs of the marathon, feeling comfortable and then uncomfortable over and over again. It was like the rhythm of a haiku poem 5-7-5 syllables. 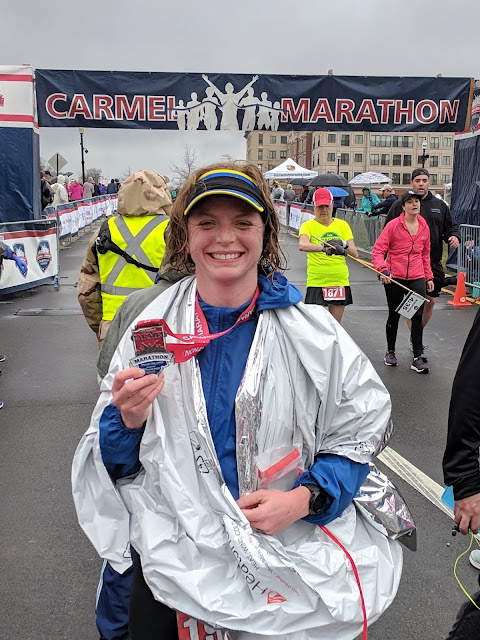 The wind and the rain picked up again a few times. I told myself, just four more 5k’s left. We made our was back to the Monon Trail and back to the mile 25 marker that I saw the other runners at hours earlier as I was heading out. One of the last water stops was full of seniors cheering and pumping their hands in the air. It made me feel like I was doing something pretty exceptional. I had regulated my body pretty well. I was wet and cold, but not in a dangerous way. We ran back into the central area of Carmel and I ran into the finish strong. I finished, grabbed my medal, got a few pictures taken and my face blew up like a balloon. It was beat red, cold and wet. I would not be lollygagging around the finish area, I went straight to my car and sat down. The temps were really dropping and I turned the heat on and felt safe. I had done it! The rain turned to sleet, which turned to icy snow. I woke up to go to the airport and there was a crunchy layer on everything. The roads were very slick. This was definitely a marathon to remember. It took finding the means to express myself, as a Poet does, in adverse conditions and find a way to make it into art. Your life is your art. 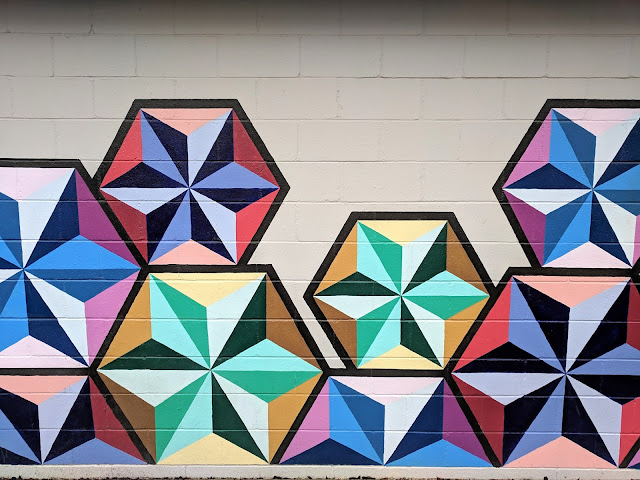 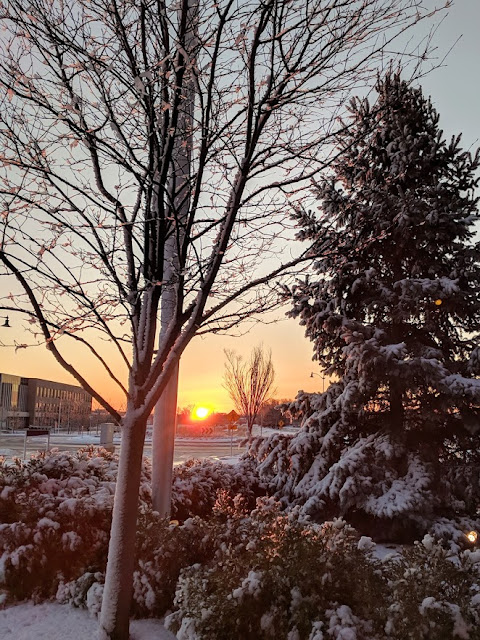