The Warrior archetype is the mindset we must go into every run and race with. We do not know how we will come out the other side. We must align with our internal wisdom. From couch to 5k, half marathon to marathon, whatever the distance, it takes a warrior’s mindset. Running is a battle of will, on daily runs increasing mileage when boredom and deep fatigue set in, when the weather is less than ideal, or you are tired from all your other responsibilities. There will always be reasons to abandon the mission. For a long time, I couldn’t even articulate what the word surrender meant. I always thought it meant quitting, waving the white flag of defeat. I have since learned that it means having trust in the process, let things play out, have faith. The shadow side of the warrior lives in the duality of all or nothing. She abandons the mission if it doesn’t seem to be playing out how she thought it would. She is not a “quitter” so she pushes hard through pain and can get injured. Grit takes bravery, but it also takes clarity and mindful presence. The light of the Warrior archetype is that feeling at the end of the race when you feel like a superhero, surrendering to the journey. 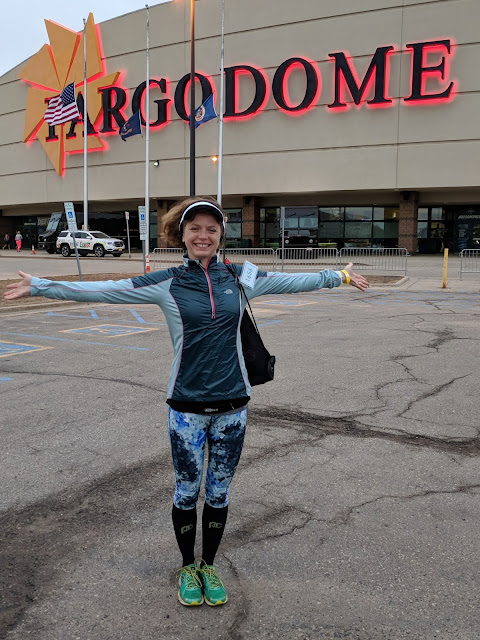 The Fargo marathon was a short two weeks after the Eau Claire marathon. I was getting more comfortable with marathons closer together and this would be my closest yet. I was feeling good and it was back to some cooler spring weather for a race “up north” even for us here in Minnesota, up to the Fargo/Moorhead area just below the Canadian border. Driving to Fargo alone I had lots of time to think. It dawned on me how strange these little trips are becoming to run marathons. I was now a proud member of Marathon Maniacs and had my eye on joining the 50 states marathon club, to run a full marathon in each state. I wasn’t able to join the club until I had 10 states under my belt, and I wasn’t there yet. The trips were now part of my running journey and I was definitely going out of my comfort zone to do what I love. I knew that I was very fortunate to have these opportunities and I wanted to seize them.

The morning of the Fargo Marathon was cold and windy. My biggest decision was how to layer up since the wind was really whipping, but the race begins inside the Fargodome, their big sports and entertainment center. Being a Minnesota girl, I know all about weather. I also know that Fargo has weather harsher than the twin cities and much more wind. We started warm and toasty inside, but once we excited the dome the wind took my breath away. This was bound to be an interesting race. After exiting the dome, the race immediately ran through neighborhoods with people just rolling out of bed, bundled up with coffee in hand standing out on the curb cheering runners on. It was a nice relaxed atmosphere. The temperature was cool and perfect for running. I started to feel fatigue early on, but knew my legs were still strong, just not fresh. I felt comfortable with my speed, I just would need to get comfortable with the feeling of fatigue so early on. 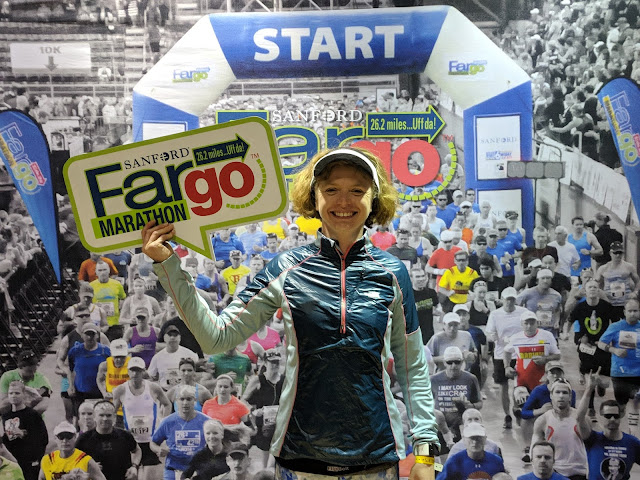 The spectator support was nice. We wove our way through a few different college campuses and across states lines between Minnesota and North Dakota a few times. The race ran through a lot of neighborhoods with “garage” bands out playing in front of their homes. The town seemed to realize how much went into running a marathon and came out with cheering, music and support. At one point, around mile 20, when I needed it most, a woman on the sidewalk called out to me and some other “masters” women runners “look at all this female power, absolutely beautiful!” This is exactly what we needed to hear as we tried to stay strong and steady. My legs had been tired for hours and it was just a matter of putting one foot in front of the other and keep moving forward.  My Warrior archetype gave me resolve to keep moving and surrender to the process. This archetype is cultivated in my daily runs. During training runs I actively reflect and practice being in the moment, doing the task at hand. I surrender to the process. Then in races I am able to stay engaged and present.

The end of the race was near, and I was being blown around the road like a pin ball. At one point the wind blew me to a standstill. I was doing the motion of running but the wind was pushing into me so hard it felt like I wasn’t moving forward. The comradery of runners along the course was exceptional. Two women ahead of me were cheering each other on. There was a person dressed as the grim reaper in the last mile of the race with a sign that said, “the end is near” and it felt like it couldn’t get any harder. Then it did. The last quarter mile the wind was blowing so hard it pushed my body across the road and almost into a barrier. I put my visor down over my eyes and sprinted towards the Fargodome with everything I had left. I ran down the ramp as I entered the dome and crossed the finish line. 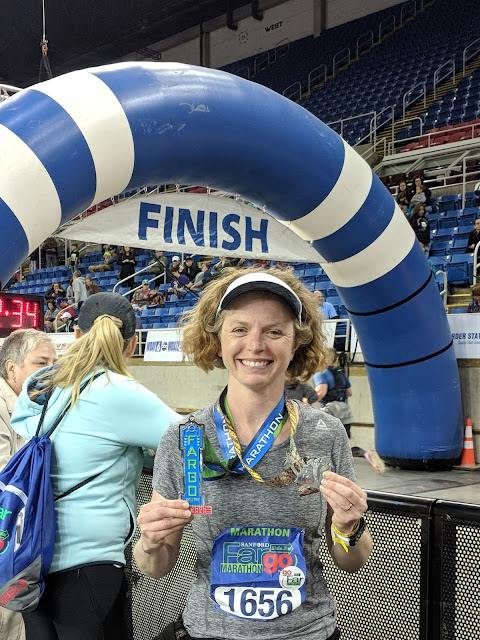 Once I slowed down, after the wind and the extreme effort I had shortness of breath. It almost felt like I had the wind knocked out of me. I gasped and wasn’t sure if I should head towards the medical tent. I slowed down, walked carefully and things started to regulate. The race had literally taken my breath away!  I had my medal put around my neck and then went to the Marathon Maniacs booth where they had a separate medal for members since this was one of their premier races. I walked around and made my way back outside where it was still howling wind. I cheered for the runners making their way to the dome and to the finish knowing what they were going through. Yet another race where I could hardly believe what I had done. It takes the mindset of a Warrior, that’s for sure.