#32- The Doorway- We Run This Beach Marathon- Gulf Shores, Alabama 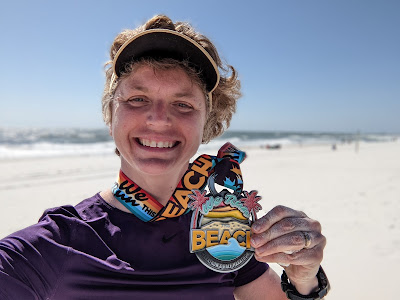 The Door archetype- We think of doors as a way in to something new. I’ve always loved taking photos of doors, especially in far off lands. When I went to Italy alone as a 19 year old, I couldn’t take enough of photos of the mysterious, perfectly worn patina of the doors lining the tiny, winding streets through cities like Florence and Siena. When we step through a doorway, we step into something different. Somehow we are different than we were if we allow ourselves to cross over that threshold. We do this all the time. Sometimes it is more ritualized than others. We may voluntarily do this and other times it is not on our own terms. The Door archetype always leads us into something new. There’s always the opportunity to leave the old you behind and walk into the liminal space of what’s next.
My daughter and I had flown into New Orleans and had a couple of days in the vibrant, eclectic, energy-filled corners of the festive French Quarter during Mardi Gras season. We then made our way east and then south to the coast at Gulfport, Mississippi and over to Biloxi. We hugged the Gulf of Mexico on Hwy 10 through Mobile and finally made our way to Gulf Shores, Alabama for my next marathon. The sand along the coast was stark white and fine. It was as if it was sifted and was laid down like powered sugar. We made our way to our hotel inside Gulf Shores State Park and went for an evening walk as the sun was setting with the perfect sherbert-like colors of orange and pink. We immediately looked for shells, as we both love to scour the shore at low tide for treasures pushed up on the beach. 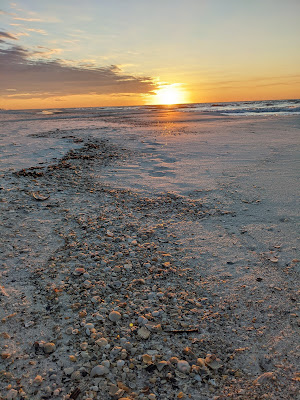 We walked towards a pier that I later found out used to be much longer, but when Hurricane Ida came through the year before, part of the pier was swept out to sea. We wandered across the sand with eyes on the ground picking up bits of shells that caught our attention. We were directly under the pier when I looked out towards the water and the way that the pilings were positioned was a bit of an optical illusion. It looked like an endless succession of doors. I stood looking out and imagined it as a portal to another world. It grounded me in the liminal space of the shoreline and the future that I had no idea what it would hold. I let myself be light and flexible in the threshold, not grasping for anything in particular and vowed to be open to whatever might come through. I was calm and ready for what lay ahead. 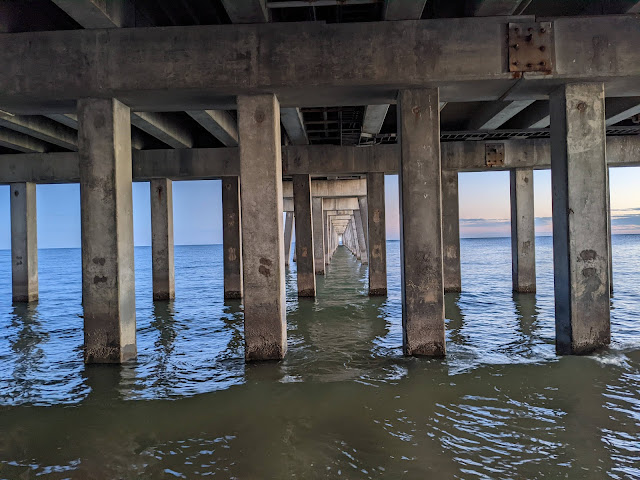 The next morning had a sunrise just as perfect as the sunset the night before. I left my daughter in the hotel room and I knew she would spend the day down on the beach taking in the sand and surf. I drove to a parking lot for the start of the race a few miles down the road. There was a bit of time to walk along the beach and gaze out again at the vast open expanse of water. I fully embodied myself standing on the edge with the rhythmic sound of the waves crashing in and receding away. I wandered around a bit and casually approached the start and had apparently lost track of time, because within a minute the announcers called for us to begin. We were off! We ran away from the beach, down the street and into the maze of boardwalks and paths that snaked their way through the State Park, where we would spend our 26.2 miles around three lakes, among Live Oak trees draped in Spanish Moss within the nine different ecosystems of the park. It made for a beautiful run and a calm atmosphere to take it all in. 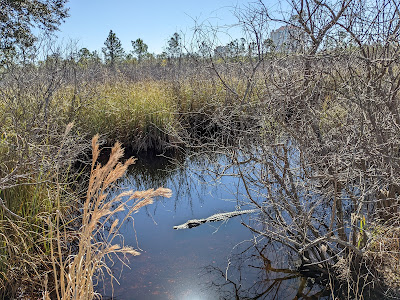 The morning was cool, but comfortable. I was pleased that it wasn’t supposed to warm up a whole lot throughout the day. My relaxed mind had nowhere else to be, nothing else to be doing. I was running in the liminal space of neither here nor there. Just where I wanted to be. I enjoyed it for what it was. This journey of running a marathon in every state has proven to be an adventure I never would have predicted. Yet it’s one that has certainly shaped me. This marathon wasn’t memorable in any specific way, of overcoming something in particular like weather or terrain. I had trained adequately so it was difficult, as all marathons are, but not over the top. It was about as “comfortable” as a marathon can be. I wasn’t grasping at time, so there was no hustling involved. 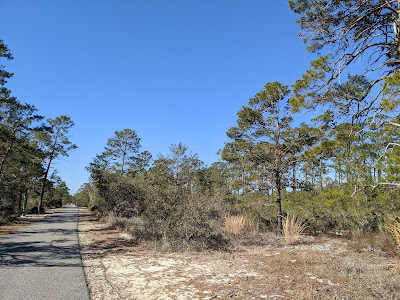 I had texted my daughter a few times and she had been walking along the beach and said she would meet me at the finish line. I had told her that it was at the same place as the start, near the beach. She didn’t seem to be able to find it. Then before I knew it, just as the race had started by simply running through the Doorway archetype at the beginning, I was running across the boardwalk and suddenly, there in front of me, was the finish line, not where I had expected it. I had crossed over the threshold and then had found myself re-entering in a different, unexpected place. One that I was at peace with and excited for whatever future awaits. I saw my daughter and waved and she gave me a big hug and congratulations as I received my medal. Here I was, a new me, one that was different than the person I was 26.2 miles ago. 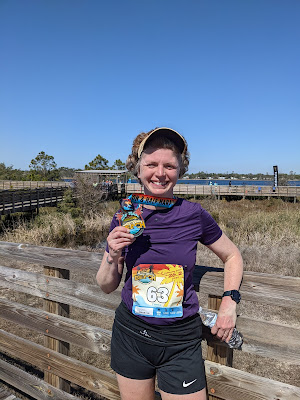