“The Heart sets the pulse for practice, awakening our emotions with its beats, granting us vision, and moving us forward on our paths.” It is also at our center. Sometimes when we are not grounded and centered, we can feel like our heart is not “full.” We feel disillusioned. We can reclaim our center by sitting still, writing, going outside, listening to music, or running. Allow yourself to feel your own big heart and see if that boosts your feelings of contentment. 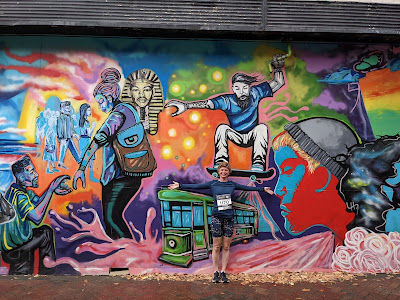 After a family trip to Arizona in the fall, in early December my daughter and I went on another running trip together, this time to Memphis, Tennessee. We flew in on the first Friday of December and got our rental car. We made our way into the city and got our first taste of Memphis style BBQ at Central BBQ. It was definitely something special. We made our way to the race expo at the Convention Center across the street from our hotel. There were lots of COVID protocols in place, but I had filled out the proper forms before we left, so that all went smoothly. After navigating the expo we had a wonderful pasta dinner and headed back to the hotel. We knew we would have the rest of the day after the race and most of the following day before we headed home. We were on an upper floor of the hotel looking out at the city. We could see the St. Jude’s Research Hospital where I would be running through the next morning. I was excited that my daughter would be able to watch the runners from this vantage point throughout the morning as they make their way around the city. 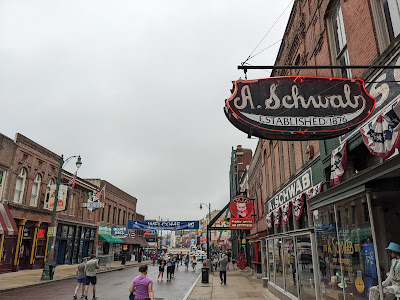 I wasn’t able to get my usual pre-race breakfast foods, so I was glad that I had packed some peanut butter and I had some squished muffins that I had brought from home. We settled in for the night looking out at the lights of the city, the giant pyramid of the Bass Pro Shop and the bridge across the Mississippi River. The race had a much later start time than usual because the runners started in waves. Most marathons have corrals which send off a group of runners about 5 minutes apart. With the pandemic spiking in number of cases with a new variant, the race directors wanted to be extra careful so everyone had a slotted start time window. I woke up in plenty of time to hang out and eat my breakfast as we watched the 5k race from our window. I then said goodbye and told my daughter I would wave to her from the street below as the race passed right next to our hotel. 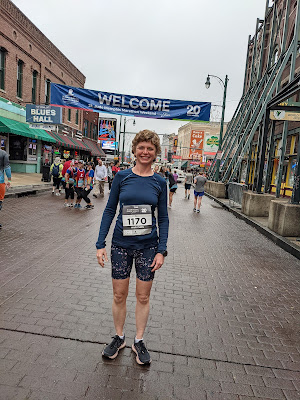 I then made my way out of the hotel and walked through the city to Beale Street where the race began. As I got closer the energy was palpable. Runners were milling about. I took some pictures of the nearby street murals that I found. We had seen several the day before as well. I went by the giant holiday tree that was lit up and turned the corner to find the lights and sounds of Beale Street in full swing, even in broad daylight. I looked forward to showing my daughter this lively part of town in the evening with the neon lights and live music in full swing. I could hear the rousing announcements celebrating what everyone was there for, the kids of St. Jude’s. The race is a big fundraiser for the St. Jude’s Research Hospital. Emotions were high as people posed for pictures in the electric atmosphere. We all knew this was a race to do with heart. This time I knew the Heart was my archetype for the day before the race even began.

Many runners were wearing “St Jude’s hero” singlets indicating that they had reached a significant fundraising milestone. I took in the atmosphere and it felt like something special. I got to the starting area and people were streaming past the starting line. I decided that I was ready to start my journey to the heart of the marathon. 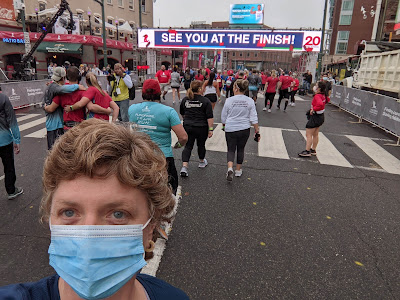 The starting line had a big sign that said, “See you at the finish!” We first passed through some sections of the city that we had been in the day before. The energy was high and I even posed with a runner dressed as Elvis, since we were in Memphis after all! We then turned towards the street that would go right by our hotel. I texted my daughter when I was close and looked for her up at the window. I stopped in the street and waved my arms in the air. I could see her tiny silhouette waving and cheering me on. My heart burst wide open. We then turned into the St. Jude’s Research Hospital campus where people were standing at the side of the road cheering. We then turned towards the water and the bridge that crossed over from Tennessee to Arkansas. I could see our hotel in the distance and waved once more. 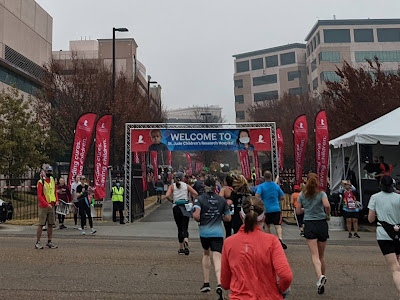 We then went down Front Street past the shops that we had been at the day before, past Gus’ Fried Chicken that we had planned to get as my post-race meal later and the Central BBQ we ate at for lunch the day before. We also passed the National Civil Rights Museum where we planned to go before we left town. I felt like I was getting to know my way around the city. We went further out of the city and crossed a bridge over the highway and made our way to the neighborhood of Midtown. I love urban marathons and seeing all the different areas of a city and the houses in different parts of the country. People were out on the street cheering us on. The Heart of this city began to show more and more with every step. Eventually we got to Overton Park where we ran on a trail through trees that still had their fall colors, even in December! We ran through and around the park twice. 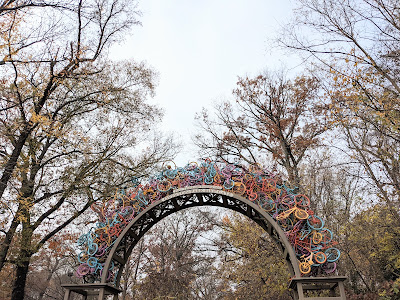 The miles were hard, but the people cheering really made my day. One woman was holding a sign that read, “Someday you will no longer be able to do this, but today is not that day!” I was overcome with emotion, pointed to her sign and said, “I love it! Today is NOT that day!” I was running very close to the edge of the road. I wanted to see people, make eye contact and give high five’s to all the kids standing and waving. It reminded me of why I love the Twin Cities Marathon and all the crowd support they provide. A woman looked at me and said, “you make it look easy” with a big smile on her face. I was smiling too. I was running with all of my Heart. The people of Memphis seemed to be supporting their runners every step of the way. I was quite moved by their enthusiasm. 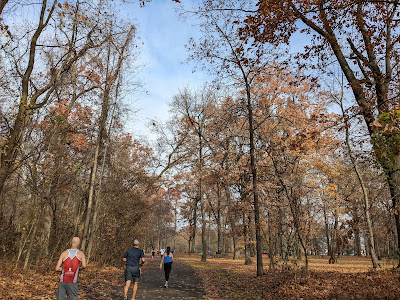 I was pretty unaware of my time, but seemed to be moving right along. We went through the Evergreen Neighborhood and Crosstown. At one point I heard some women near me talking about how this was their first marathon. We were at mile 20 and they looked great. I congratulated them and said that they must have done lots of things right in the first half of the race to be this strong this many miles in. They asked me if it was my first marathon and I told them it was my 31st. They were amazed and I told them that it is something that is very easy to become addicted to. It was simply the best. I was then running alone with one of the women and she told me how she used to watch her dad run marathons and he was doing the 50 states quest. She said he had passed away last year and that she was running for him. I had a big lump in my throat and thought that it was beautiful. 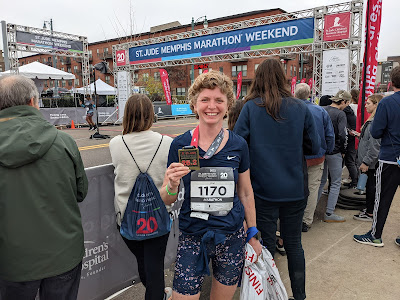 I also passed a woman walking. She had only a couple of miles left. She was finishing the half marathon. She said it was her first ever and she had never done anything this hard before. There is no doubt in my mind that she finished. I told her “you got this!” as I passed her. Many runners that day were doing their first full or half marathon. They were all succeeding with heart and passion and drive. It was incredible. We passed a row of large signs that had photos with children that were patients at St. Jude’s Research Hospital and it brought it all home to my heart. We all knew why we were doing this. We all ran those last few miles back into the city grateful that we could do it and finished strong. What a day! 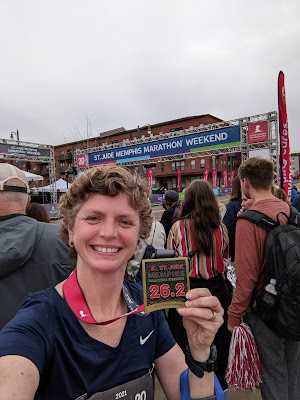