The Ocean
The Ocean archetype is stepping into the unknown. It represents the unconsciousness, all that is beyond our understanding. It is our depths. It’s power is unmatched. Amidst this power, it calls us, inspires us, invigorates our life on the land. The energy of the Ocean promotes change. Life is all about change, let the waves crash over us. Each drop of the Ocean is part of the whole. With the Ocean we take a deep descent. This is the only way we can live fully on the surface. The Ocean is about absorption, sensuality. When it is in shadow we are unstable, we are surface level, not deep.
"The Ocean is the favorite symbol for the unconscious, the mother of all that lives."
-Carl Jung 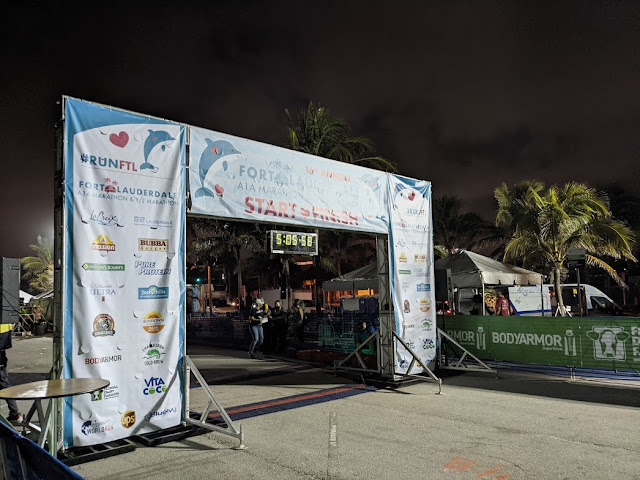 The entire trip and race had been very last minute. There are still very few in-person races going on with COVID still widespread. I hadn’t done an in person race since Atlanta, the end of February of 2020. I had just heard that the Eugene Marathon was going to be cancelled once again. I would have to wait until 2022 to get to Oregon for that race. I had been aching for a race for so long. After finding out about Eugene, I checked the Marathon Maniacs race calendar to see if there were any races that were going ahead with in-person racing. I found Ft. Lauderdale. It was a race I had thought about several other years. It takes place President’s Day weekend, so it would be a good weekend to get away and not a bad time to leave Minnesota for a bit of a respite to help get through the rest of the winter. I looked at the race web site and they seemed to have all the COVID safety protocols in place. They would require masks at the expo and at the start and finish of the race. Their water stops would have emergency personnel workers and there would be no gear drop area. They wouldn’t be handing out the medals as usual, but rather would hand you the medal in a bag. They seemed to have thought about everything and were going to try their hand at in-person racing. They knew the entire running community would be watching to see if they could pull it off. The race looked good, so then I began to look at flights. That came together quickly using miles from all the trips that had been cancelled. My daughter had planned to go to Oregon with me for the Eugene race, so we decided that she would come with to Florida and we would have some time there beforehand to acclimate to the weather before the race.

Before we knew it we were buying tickets to leave just 5 days later. We arrived in Florida on Sunday night and had the week touring around southern Florida before the race on Sunday, February 14th. The forecast all week predicted warm temps so I went in with the mindset that I would just run a pace that felt right for the weather, the temperature and humidity. Since I didn’t  think I was going to be doing a marathon until late April, I hadn’t done my long runs leading up the race. I had kept a decent base, but was missing my usual 16, 18 and 20 mile long runs. I knew my body could handle it, I also knew that this would be another race with zero concern about the time. I was just going to enjoy the ocean view and take in the tropical air and dive into my inner depths with the archetype of the Ocean. 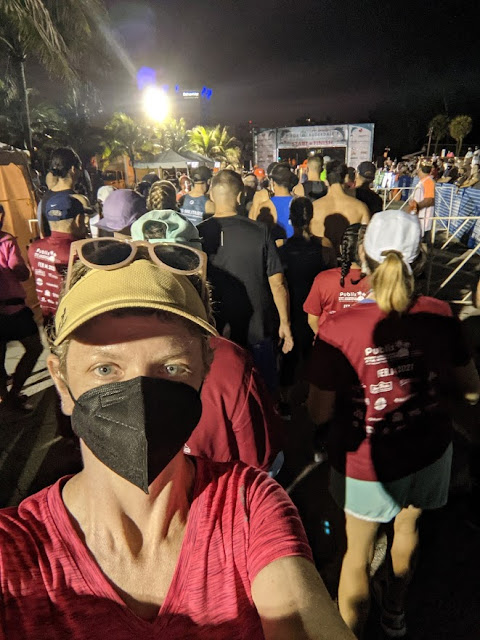 I woke up at 3:45 am for the big day, marathon #27 very very far from home. The weather in February there could not be more different than at home in Minnesota. It hadn’t been above zero at home the entire week. In Florida it barely ever got below 70 degrees. On this morning, Valentine’s Day, it was still 77 degrees at 4 am and the dew point was 73 degrees. I had been running on the frozen lake at home in frigid temps. We hadn’t had weather at home like this Florida weather since August. I wasn’t sure what my body was going to be able to do.

I left the hotel and found parking. I walked to the beach area for the start. It was still very dark outside, you could see and hear the crashing waves and the dark ocean right next to the start area. The announcer was already reminding people that the only way we would be able to do in-person racing was if everyone wore their mask the entire time they were in the starting area. I sat at a table on the beach and prepped my muscles for what lay ahead. I watched the people and thought about what a very strange time we are living in. I can never quite get over what this marathon running journey has brought into my life and all these different places that I find myself is something I never could have predicted. Everyone seemed to be willing to wear their mask and were very happy to be there running a race together after almost a year of “virtual” racing during a pandemic that began 11 months ago. 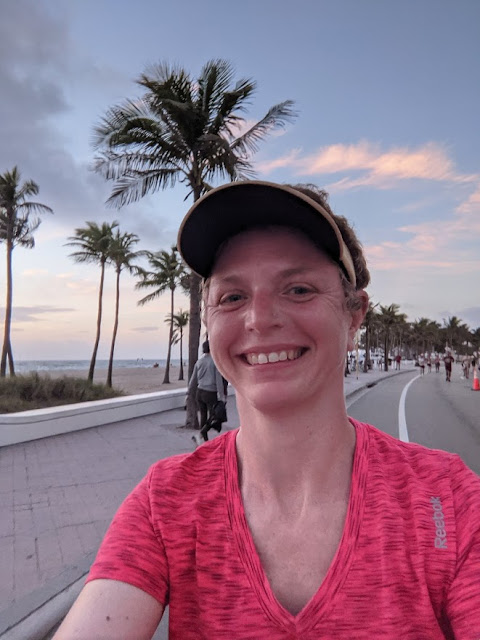 The start was very different. They limited the overall field to 3,000 runners for the full and half marathon. All the runners were in the corral, each 6 ft apart and wearing a mask. At 5:45 am they started with 20 runners at a time and they stood on dots that were spaced out at the start itself. They took off and then the announcer counted down from 10 while another group of 20 runners found their dots and it continued on this way. I was up to the start about 10 minutes in, but I’m sure this went on for a very long time. We were off, spaced out from one another, into the dark streets of Ft. Lauderdale. There were enough runners that you always could see someone, so you knew where to go. It was dark for about the first hour. I imagined once the sun came out it would really heat up. My body did surprisingly well with the drastically different conditions and I was keeping a nice easy running pace. I felt much better than expected! 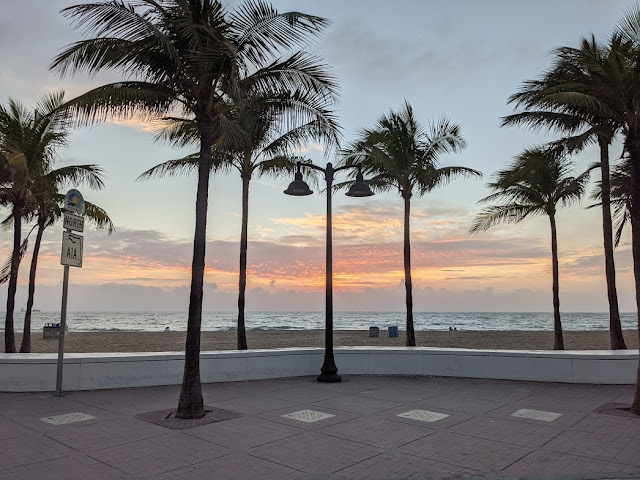 The course wound around the area by the start line a bit and then we made our way to the A1A highway that was parallel with the ocean and we would be on the all day long. The sun was beginning to rise and the view of the beach and ocean was very calming and gorgeous. We stayed on the A1A heading straight north  to Lauderdale by the Sea and around mile 8 the half marathoners turned off and the full marathoners kept going another couple of miles. Eventually we would turn around and be on our own until we met up with the half marathoners again for a few miles before we turned around to do the entire loop again as they ran into their finishing miles. It was nice to have others around. I wasn’t sure how the race would work with wanting to keep a 6 ft distance between people, yet also wanting to feel like we were all in it together. It felt really normal and that was a nice feeling. The sun was now up, but there were some wispy clouds keeping the sun from beating down. At this point I was pretty acclimated to the warmth and humidity. I was still running steady and strong. The ocean breeze helped a lot as well and I was able to keep my fluids and exertion balanced. 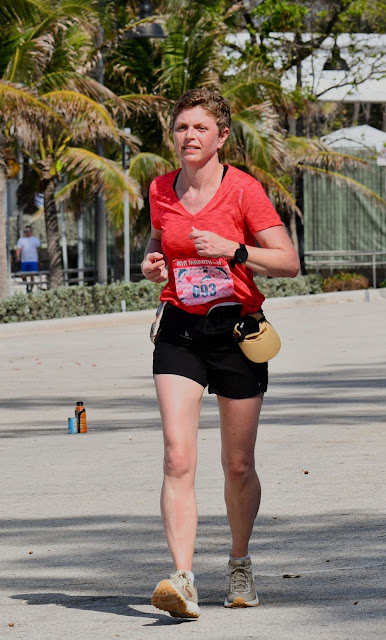 As we ran along the ocean heading south before looping around again you could feel that things were heating up. I wasn’t sure how long I would be able to keep running like I was. My hydration was on point, so I was very pleased with that. I wasn’t needing to go to the bathroom and I also wasn’t feeling overly thirsty, so I knew that what I was consuming was just what my body needed. The rhythm of my steps, of the waves and of my breathing was all in harmony. I embodied the Ocean archetype. I was very relaxed and in my element, in the depths of my being. After turning to head north again, we once again passed the high rise hotels along the ocean, the shops. I was happy that there were some nice stretches of shade I could look forward to. The course was different this year than in years past, but it really provided a perfect blend of views, shade and playful oceanfront vibes. I was loving it. I started dumping water over my head at each water stop as I grabbed water in one hand and electrolyte beverage in the other. I had a system that was working, so I kept doing it. I got through 16 miles feeling pretty good. I wasn’t in a rush, but after 3 hours out in the hot sun my running pace began to slow down. I mainly wanted to make sure that my body didn’t overheat. I was so thrilled to be doing the race, I didn’t mind that it would begin to take a lot longer. 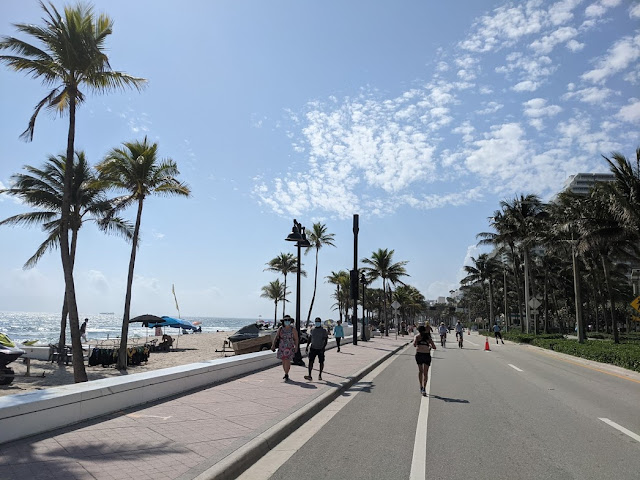 On our way heading back south again, the tourists were out having breakfast at the outdoor restaurants. People were walking along the sidewalk going to the beach with their towels and beach umbrellas. We would sometimes hear applause as we ran by. I could start to see the runners around me were beginning to show signs of the heat, fatigue and many many hours on the road. The crowd support was nice. There was no talking amongst the runners, but we were all in it together. We were grinding it out, making our way step by step to the finish. I knew my legs were definitely going to be sore. I had no doubt that I could make it, but I was going to feel it for awhile. I ran as best I could into the finishing chute, putting my arms up as I always do. 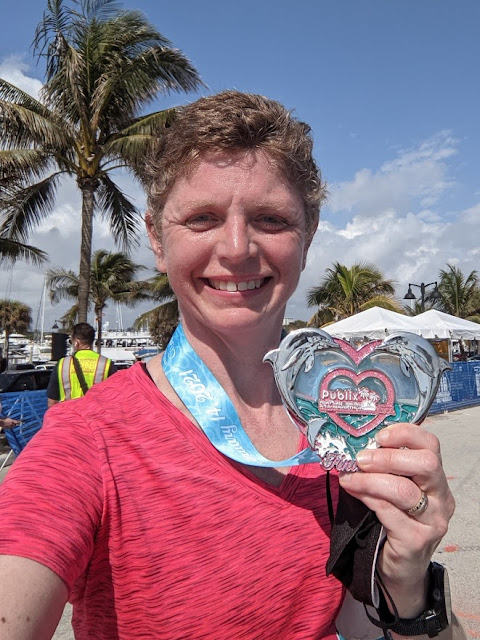 They handed me my medal and I took it out of the bag and immediately put it around my own neck and put my mask on. My breathing was hot and fast. I grabbed the fruit and beverages they handed out at the finish and came across a big sand sculpture that they had created in the shape of the dolphins coming together in a heart shape that matched the medal and took a self in front of it. I went to the beach and took a few more pictures of the ocean, palm trees and me with my medal. I had done it. I dove into the depths of the marathon Ocean and came back to land a changed person. This would be another marathon I would never forget. 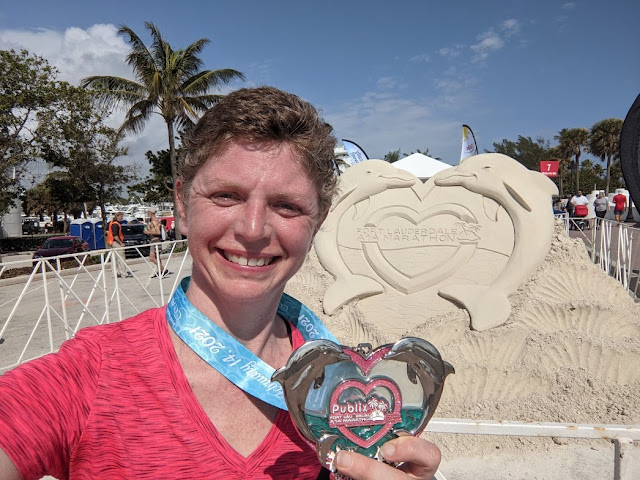